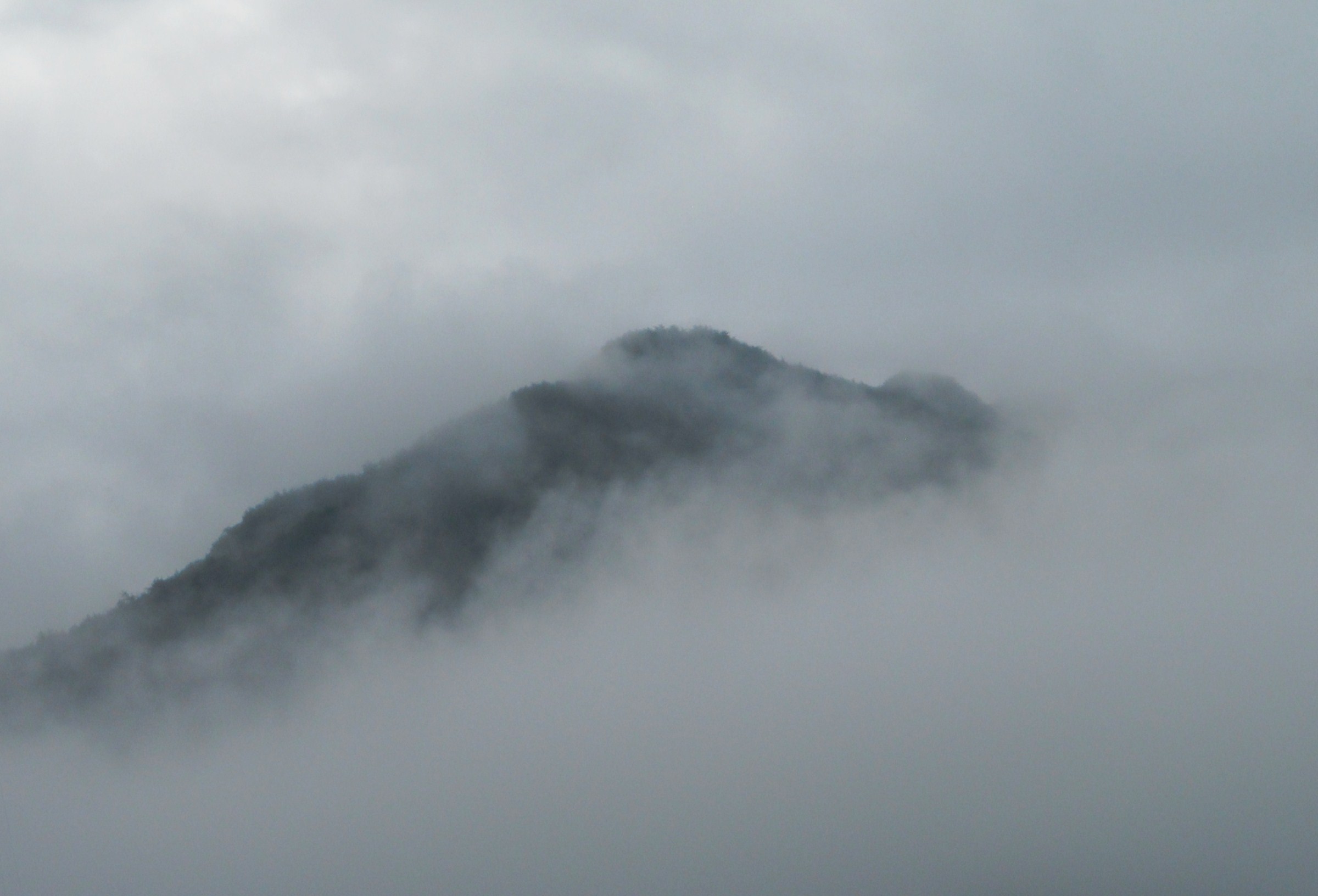 Welcome to my Tea blog!

My blog is all about tea (camellia sinensis). This segment of the tea files will focus on the Jirisan area of Hadong County, South Korea. Whether your a tea aficionado, tea connoisseur, tea enthusiast, or tea novice, I hope to provide you with selective information, stories, and my personal tea trekking adventures, and at times, pictures relating to tea and teaware.

Let's explore Jirisan, Hwagae Valley together and discover where one can arguably find growing the best nokcha (green tea) in Korea. If I can describe Hwagae Myeon located in Gyeongnam Province, Hadong County, South Korea in one word it is: Rural.

Things haven't change much here in the past 20 years. Yet, when talking to the village people here there seems to have been a noticeable transformation. However, it has to do with a small influx of people, mainly retirees from the major metropolitan cities in Korea, that have built homes here or have dreamed about building vacation homes in Hwagae Myeon. A visitor coming to Hwagae would at best describe it as an remote village located in a picturesque landscape. What it offers though is an environment that is clean, devoid of noise and air pollution from manufacturing or industrial plants.

Aside from agriculture, the major non-industrial polluting industry in Hwagae is tourism. A slower pace of life, fresh mountain air, and clear bubbly mountain water that flows down from the Jiri Mountain range and drains into the  meandering Seomjin River  which translates into "toad ferry" river. 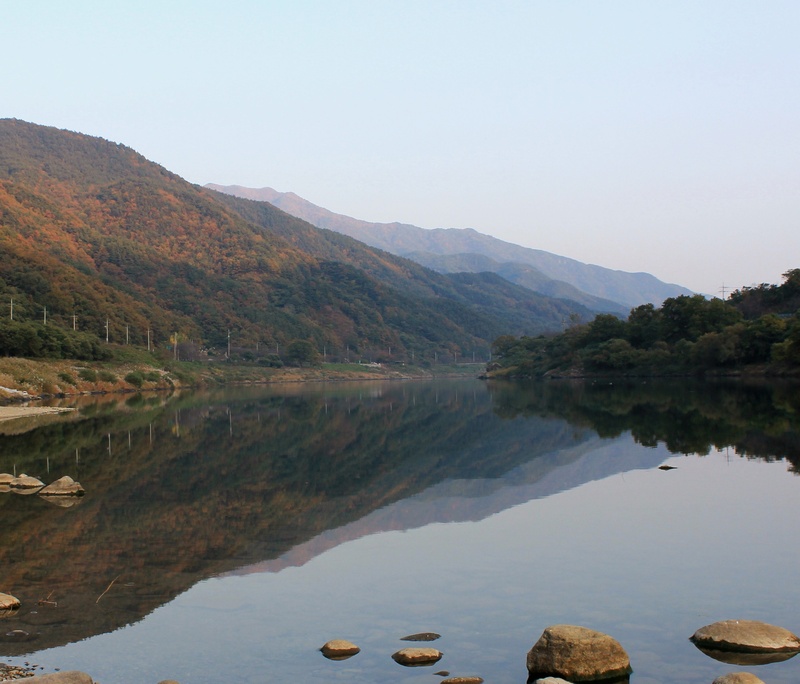 Hwagae Myeon in Hadong County has been designated a "cittaslow" village along with its next door neighbor Agyang Myeon. From Italian, Cittaslow translates into "slow city. According to Cittaslow.org, "it is a cultural movement which was founded in 1999 to promote improving the quality of life in towns by slowing down its overall pace."The pace of Hwagae is similar to that of a snail. Like a snail that moves slow and steady, so goes Hwagae Myeon.

The only time that there is an noticeable increase in movement is during the Spring season. Thousands of Koreans and international visitors descend upon this remote village to enjoy Hwagae Myeon's two famous festivals; the annual "Cherry Blossom Festival" and the annual Hadong "Wild Tea Festival." The population then swells from 4,000 to about 12,000+. 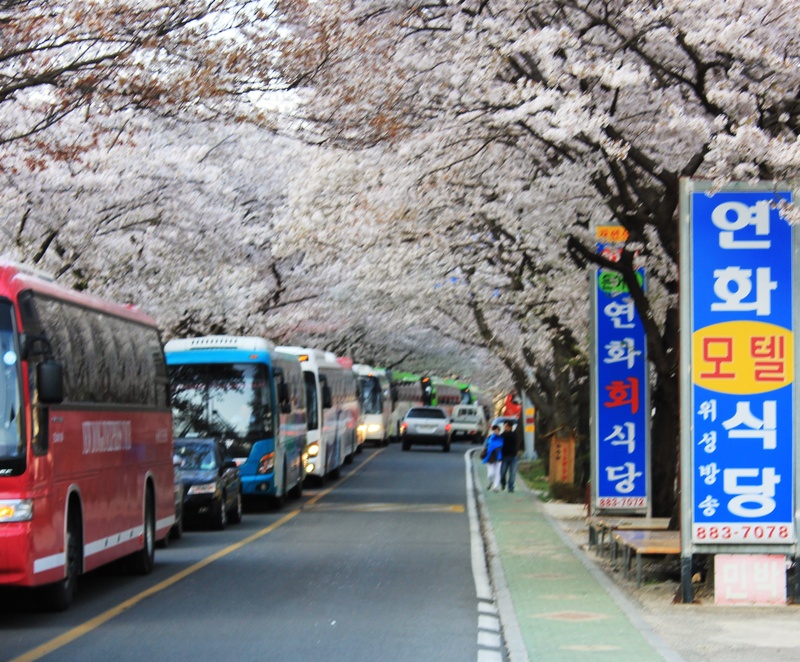 Stay tuned for (Part II)  coming to you in the near future!

I saw this writing on a wall on the first floor of the Hadong Tea Cultural Museum in Hwagae Myeon, South Korea which caught my attention. 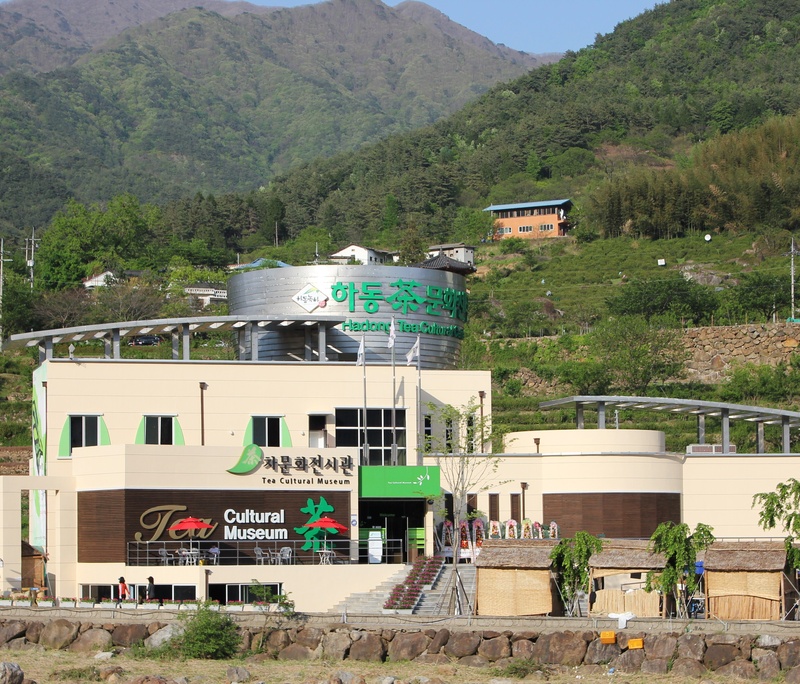 The following is an excerpt from Chabu ( Rhapsody to Tea) by Hanjae Yi Mok, a Joseon Dynasty scholar monk who lived (1471~1498). He described the beneficial effects and euphoria of drinking 'seven cups of tea.'

1. When drinking the first cup the dried intestines are cleansed.

2. When drinking the second cup of tea, its refreshing spirit seems to make me a Taoist hermit with superpowers.

3. When drinking the third cup of tea, my headache goes away.

4. When drinking the fourth cup of tea, I become grandiose and open-hearted, and my worry and spleen fade away.

5. When drinking the fifth cup of tea, a sex fiend runs away in surprise, and I seem to wear cloud skirt and feather clothes.

6. When drinking the sixth cup of tea, the sun and the moon come to my mind and all the things around me look to be that I didn't even,

7. Drink half of the seventh cup of tea, and a clear wind rises from the heart. When I look up at the door of heaven, it is very close, but there is exhuberant Bongrae Mountain in the middle.

How would you describe your experience with multiple cups of nokcha?

I apologize that I haven't had much time to blog since I left Hwagae Valley, South Korea for the USA in late November 2013. However, I am slowly getting back into it. 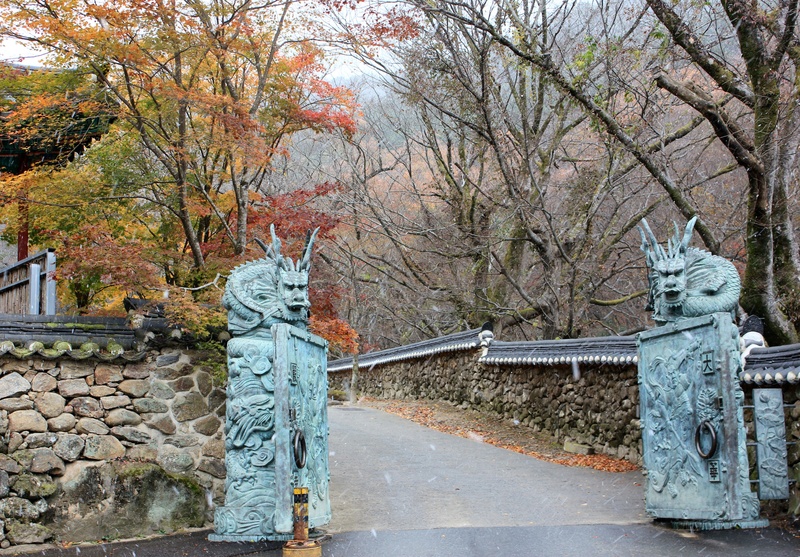 My last few days prior to leaving Hwagae Valley I spoke with and thanked many of my friends, who also happen to be very passionate tea artisans, for freely sharing their knowledge about nokcha and balhyocha, their selfless friendship, and imbibing in copious amounts of exquisite green tea in Jirisan. 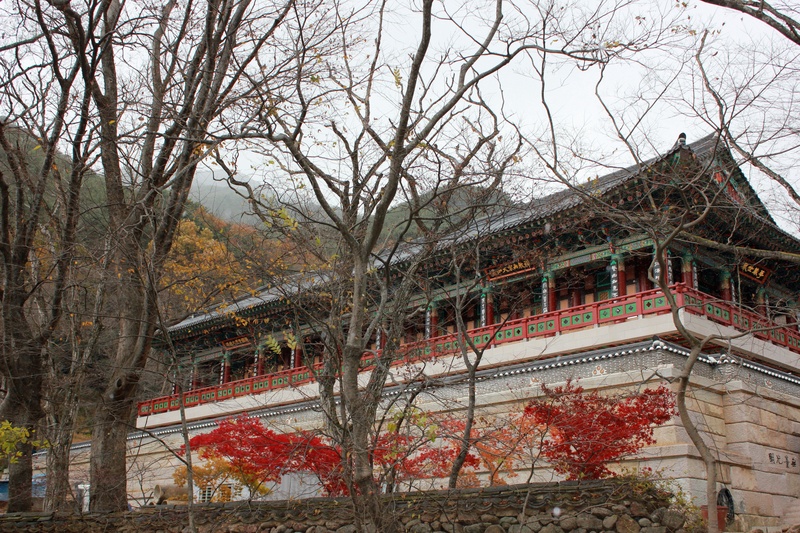 I have been fortunate to have cultivated for the past 5 years excellent tea sources which will surely help me to deliver fresh and tasty nokcha to all my tea friends going forward in 2014 and beyond! 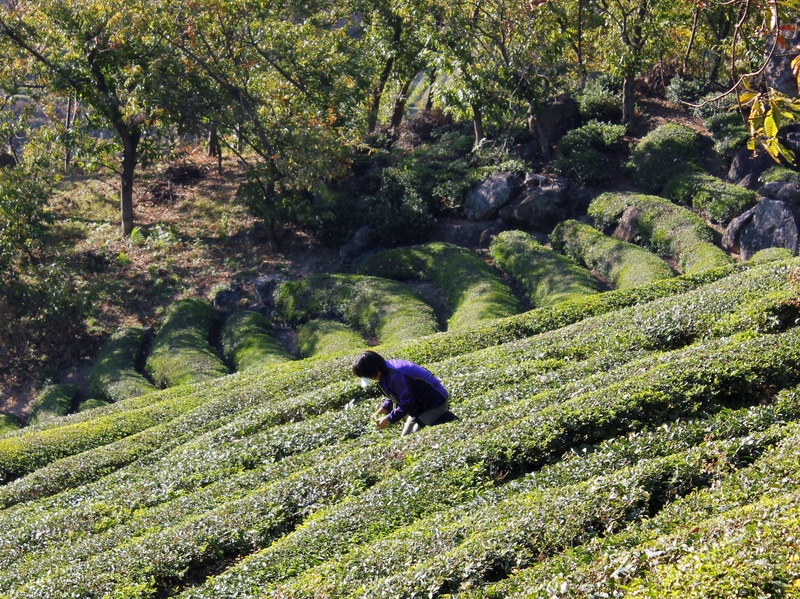 Thank you for your patience and continued patronage!

Today, Sun and I paid a visit with Lee Deok Joo. It was a beautiful autumn day. The morning was cool, but then it warmed up to 20°C/ 68°F. As we were approaching his tea factory, he was actually leaving his tea site to go somewhere when we flagged him down. He stopped his car, turned around and went back to his tea center and opened the doors again for us. He was indeed very considerate. After we walked around his ~1 acre/0.4hectare picturesque tea garden, Sun and I proceeded to enter what turns out to be his multi-purpose tea center where he invited us for tea. Here you can pay to make your own hand-plucked teas, learn about teas, and enjoy drinking teas. While sipping on Sejak (2nd flush) nokcha, he informed us that his total tea growing acreage consisted of about 3.6 hectare/8.9 acres. 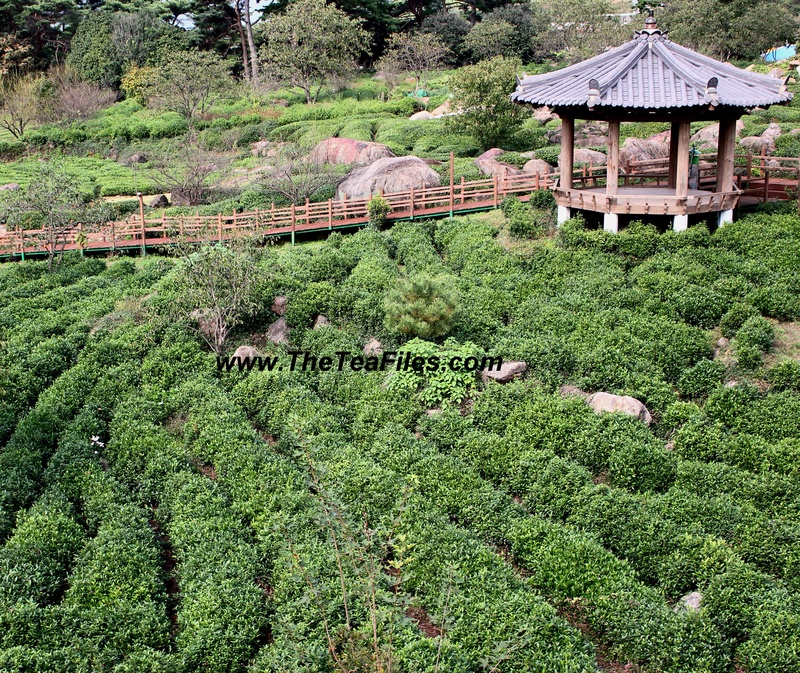 This was not my first visit to his tea center. This past 2013 spring, after trekking around the Jirisan, Hwagae Valley mountains and hamlets for about 12 kilometers/7.5 miles. I wearily descended down from mountain country and walked a few more kilometers when I spotted his tea sanctuary. From my viewpoint one can see the meandering Seomjin River, South Korea's fourth largest river. Seomjin translates into 'toad ferry' and it drains into the Korea Strait. The multi-purpose tea center was built around 2009 and has a small tea shop and tasting room as one enters his front doors. Local tea artisans who don't have their own tea processing equipment can pay him to process their fresh plucked teas at his tea center. Tea seminars are also held there from time to time. 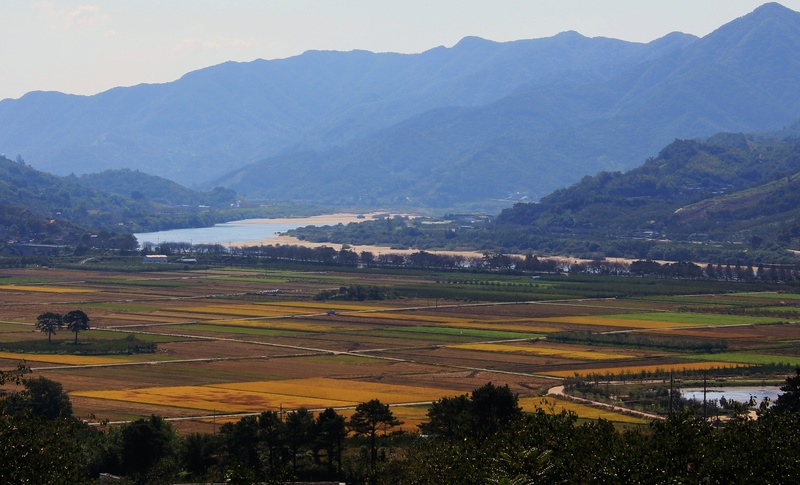 In his seventies and going strong, we talked about many things. The man is a third generation tea farmer, tea artisan, and teapreneur. His knowledge of the tea industry is amazing. He told us about the time he spent in Taiwan, China, and India and was mentored by a few famous tea masters of those countries. He learned unique tea processing techniques from them which he later applied to his own Korean tea processing methods to produce among other teas his own brand of unique and tasty nokcha, balhyocha, and yuja-balhyocha, to name a few, in Hadong, Hwagae Valley, South Korea.

Today, we mainly talked about balhyocha which translated directly means 'fermented tea.' In a general sense, balhyocha can best be described as Korea's unique version of partially to substantially oxidized/fermented black tea.  The extent to which the tea leaves are allowed to oxidize/ferment depends on the preferences and tea processing methods unique to each Korean tea artisan. It is typically less fermented/oxidized than what westerners are accustomed to drinking, which is a completely and strongly oxidized (~100%) black tea from say the low country tea gardens located in southern Sri Lanka, but can be exquisitely delicious with its own unique taste.

To our surprise, Lee Deok Joo plunked down on a large and heavy, rectangular-shaped, handcarved wooden table what appeared to be a dried hollowed out tangerine stuffed with some kind of tea. After inspecting it, I learned  from him that the small, dried, hollowed out fruit is called 'Yuja' which translates to 'Citron.' It is an east asian hybrid citrus fruit which supposedly tastes something like sour mandarin and grapefruit. He told us that the organic yuja fruit was harvested from a cittaslow (slow city) village on Namhae Island. Namhae means 'South Sea' and is an island off the southern coast of South Gyeongsangnam Province. From an agricultural perspective, Namhae Island is well known for cultivating black and white garlic, yuja fruit, and one can see picturesque terraced rice paddies. With nice sunny skies, warm weather, and gentle sea breezes, Namhae is an ideal place for growing agricultural crops. The tea leaves stuffed in the sun-kissed yuja was organic jungjak (3rd flush) balhyocha of 2012 autumn vintage. 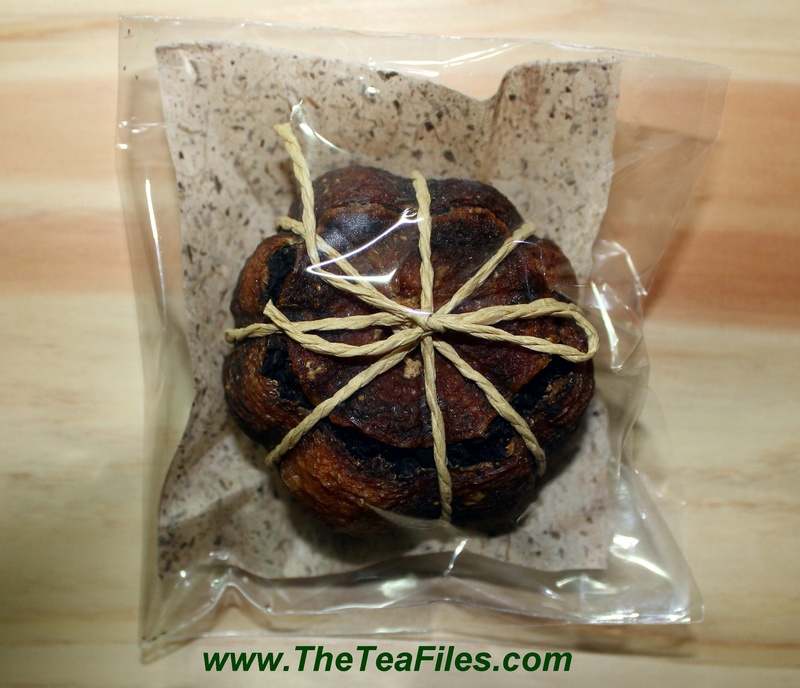 The small, dried hollowed out yuja fruit was stuffed with balhyocha and weighed 40 grams. It was attractively hand-tied with string and packaged in crystal clear cellophane. It is an exclusive artisan citron rind naturally scented leaf tea that is not currently widely available within Korea, and probably not available anywhere else in Asia or the West.

Lee Deok Joo had placed a container of the crushed dried fruit rind mixed with the balhyocha on the table. He infused the concoction with boiling water for about 2 minutes and drained the mildly fragrant golden amber tea liquor into small teacups. The dried yuja permeated the balhyocha leaves which gave the tea liquor a sweet, biscuity taste with trailing dry, mellow, citrus-like notes in the back of the throat. It had an exceptionally pleasant mouth-feel with no hints of astringency or sourness, which I had originally anticipated before the tea session began, and was just plain delicious!

After we drank about 4 pots of the delicious organic handmade yuja-balhyocha, we talked so more about autumn tea that was currently being hand harvested in Hwagae Valley, before leaving with a thoroughly quenched palate.

It was an inspiring and colorful tea session which we thoroughly enjoyed with yet another kind, interesting, and expert tea artisan in these parts of Hwagae Valley, Jirisan.

All over Jirisan, autumn is a splendid place to be for casual hikers, serious trekkers, and nature watchers. Trekking in Hwagae Valley in the early morning hours, one can experience fine mist softly caressing the face and skin. It is a time when the surrounding mountainsides and valleys come alive with vivid colors that soothe the senses.

Here are a few mid- autumn pictures that I took while trekking around Hwagae Valley. 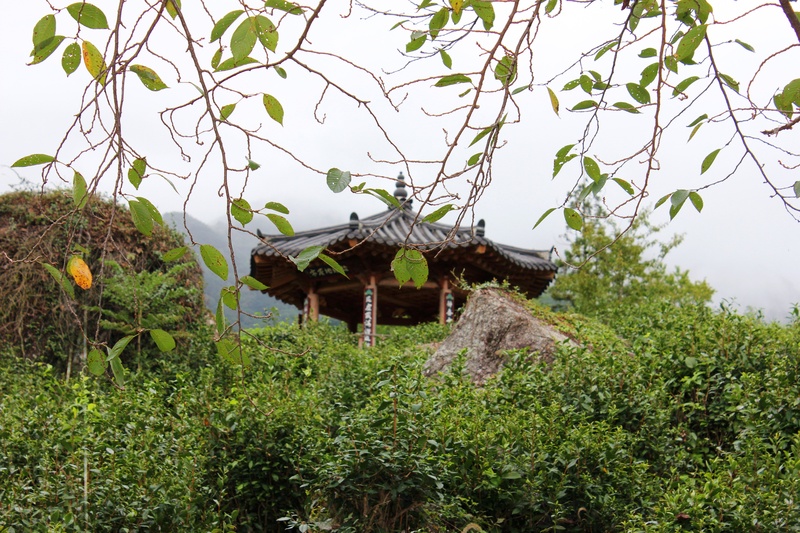 A morning picture of a traditional Korean pavilion perched above semi-wild camellia sinensis bushes growing among boulders with fog descending from above. 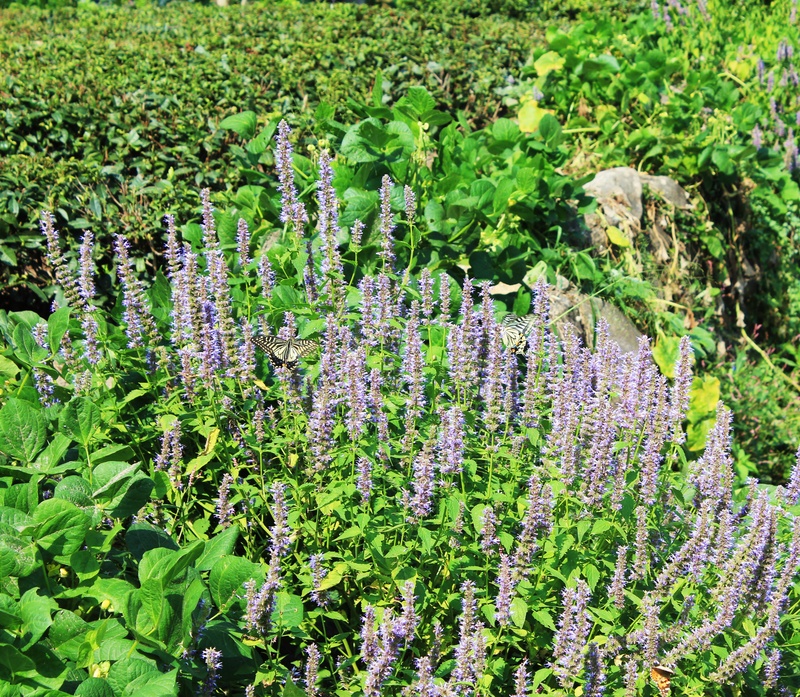 In this picture taken in the afternoon, butterflies were attracted by the highly fragrant perfume of Anise Hyssop commonly known as licorice mint with cropped camellia sinensis shrubs in the background. 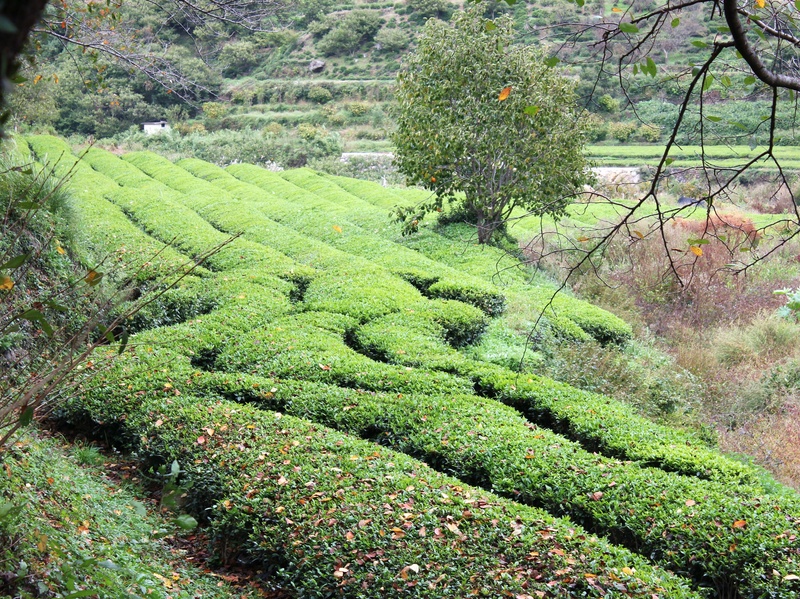 A light dusting of autumn leaves greet neatly pruned nokcha bushes to welcome them to the fall season.